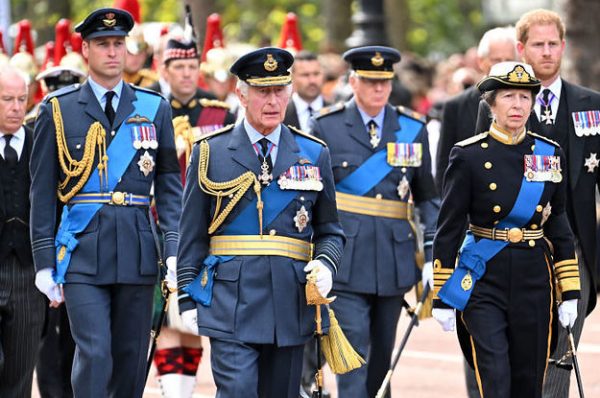 Members of the royal family gathered to follow Queen Elizabeth II’s coffin in a solemn procession in London on Wednesday.

The Queen’s coffin, which had the Imperial State Crown placed on it, left Buckingham Palace at precisely 2:22 p.m. local time.

Thousands lined the streets to watch the coffin, which was borne by the gun carriage of the King’s Troop Royal Horse Artillery, make its way from Buckingham Palace to the Palace of Westminster, where it will lie in state until her state funeral on Monday. Hundreds of thousands of people are expected to participate in the public viewing.

Members of the royal family followed the gun carriage carrying the Queen’s coffin for the 38-minute walk from Buckingham Palace to Westminster Hall.

The procession was led by the Queen’s four children: King Charles III; Anne, Princess Royal; Prince Andrew, Duke of York; and Prince Edward, Earl of Wessex. (If you’re wondering why Andrew’s not in military uniform, you can read more about that here.)

The Queen’s children were followed by her three grandsons: William, Prince of Wales; Prince Harry, Duke of Sussex; and Peter Phillips (Anne’s son).

Members of the public lined the streets of London to watch the events, and screens were set up around the city to broadcast the procession.

“To be a part of this and feel this atmosphere and the love that all of these people have for the Queen, it’s incredible,” said Sharon Osborne, who told BuzzFeed News she traveled from her home in Los Angeles to London to pay her respects.

“It’s one of those things that you’ll never forget,” she said.

As of Wednesday, there are already plans for a 5-mile line of people to wait to pay their respects ahead of the Queen’s funeral.

Some observers struggled to put into words their reasons for traveling into the city to see the commemorations.

“It’s a difficult question to answer. I feel a sense that it’s history. I think it’s just the right thing to do,” said Richard, a Hertfordshire resident who declined to give his last name. “It’s a very visceral thing. I want to contribute in some way.”

At around 1 p.m. local time, police began directing mourners away from Parliament and Buckingham Palace, telling the crowds that the area was full. Tall green fencing was erected to prevent people from joining the procession, upsetting some in attendance.

“It’s poignant to be here. Her Majesty is an amazing person,” said Carole Alan Morley, who added that her mother had observed the Queen’s 1953 coronation. “[My mother] would be here if she could but she’s died. I’m completing the circle.”

Also among the crowds were people with ties and ancestry from other Commonwealth nations.

“Despite my Pakistani roots, I was born here and I feel being part of the Commonwealth at some stage, many years ago now, but still I have that affinity for the royal family,” Rifat Soyfoo said.

“I thought that this is the ultimate occasion to pay my respects,” Soyfoo added. “Everyone keeps saying, ‘The queen god bless her soul worked tirelessly, so selflessly,’ [and talking about] how she brought the nation together no matter what creed, color, community you’re from.”

“She gave us so much,” said Chris Imafidon, a British Nigerian professor. “She was not just a monarch high up there; she was modest. She worked with my charity in the inner city and invited our students to come to the palaces.”

Millions of people are expected in London for the Queen’s funeral on Monday. A huge security operation is already underway in preparation for the event.

A brief service for the reception of the coffin was held in Westminster Hall at the end of the procession. Other members of the royal family joined this service, including Queen Camilla, Catherine, Princess of Wales, and Meghan, Duchess of Sussex.

The Queen’s granddaughters Zara Tindall, Princess Eugenie of York, and Princess Beatrice of York were also there.

Related Topics:
Up Next

By age 15, he was already playing professionally for Brazilian team Santos, and at 16, he joined the country’s national team. At 17, he became the youngest player to make it to the World Cup final, where he scored two goals — securing Brazil’s first title and his place as an international sports icon.

In the almost two decades of his career that followed, he averaged more than one goal per game and holds the Guinness World Record for most career goals. He’d go on to win two more World Cups and rack up other accolades, and fans relished not just the victories, but how he played. He popularized soccer’s nickname, “the Beautiful Game,” a phrase which became synonymous with his style. In 1961, he was legally named a national treasure in Brazil — a political move aimed at keeping the popular player from being transferred outside of the country. He later revealed that European football clubs did come calling, but he continued to play for Santos and Brazil.

Pope Benedict XVI Has Died at 95

Arguably the most incendiary issue Benedict faced upon becoming pope was the ongoing fallout from the sexual abuse of children by Catholic priests, as well as accusations of a cover-up effort on the part of church administration.

When Benedict became pope in 2005, the Catholic Church was in the midst of a very public reckoning with its history of sex abuse — a crisis about which he was very well informed. In 2001, John Paul II empowered the CDF to centralize all investigations into abuse allegations, removing that power from local dioceses after it became clear that they often failed to take action against predator priests. As the head of the CDF, then-cardinal Ratzinger worked to establish new procedures for reporting and punishing clergy accused of sexual abuse.

As pope, Benedict repeatedly spoke out against the church’s legacy of child sex abuse, apologized to victims, and defrocked hundreds of priests who had been found guilty. However, for many, his actions fell short, in part because he failed to make public the Vatican’s investigations into abuse accusations — a lack of transparency that enabled dioceses to keep these accusations secret from parishioners and law enforcement authorities.

“In the Church’s entire history, no one knew more but did less to protect kids than Benedict,” the Survivors Network of Those Abused by Priests (SNAP) said in a statement in 2013, in response to the pope emeritus’s public claim that he did not engage in a ‘cover-up’ of clerical abuse. “As head of CDF, thousands of cases of predator priests crossed his desk. Did he choose to warn families or call police about even one of those dangerous clerics? No. That, by definition, is a cover up.”

Rumors of corruption and secret cabals in the Holy See also plagued Benedict’s tenure as pope, culminating in the “Vatileaks” scandal in 2012.

On Feb. 10, 2013, Benedict shocked the world by announcing his resignation from the papacy. “After having repeatedly examined my conscience before God, I have come to the certainty that my strengths, due to an advanced age, are no longer suited to an adequate exercise of the Petrine ministry,” he said in his official statement.

His decision to retire was later dramatized in the 2019 film The Two Popes, in which Benedict was portrayed by Anthony Hopkins, who was nominated for an Oscar for his performance.

As pope emeritus, Benedict made a conscious effort to stay out of the public eye. He apparently disliked being known by such a lofty title following his resignation and asked others to call him simply “Father Benedict.” He did, however, make public appearances at events of theological significance, such as the Canonization Mass of Pope John XIII and Pope John Paul II on April 27, 2014.

Protests are continuing in China against strict COVID lockdown restrictions after a deadly apartment fire brought some people closer to a breaking point.

Across the country, demonstrators took to the streets — a mass movement that is rare in China — and defied laws designed to curb the spread of COVID-19. Some appeared with sheets of blank white paper, in place of traditional protest signs, as a criticism of the censorship limiting citizens from speaking freely.

After the fire in Xinjiang that left at least 10 people dead, which critics say was due to the stay-at-home measures that resulted in the building’s doors being locked, protests intensified Sunday. In major cities like Shanghai, protestors gathered to demand the end of the country’s ruling party and the resignation of the president. In clips circulating social media, some demonstrators can be heard repeatedly chanting, “Communist Party step down, Xi Jinping step down.”