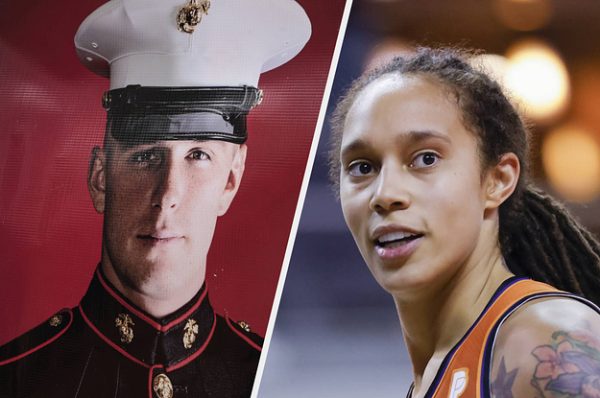 US Marine veteran Trevor Reed is on his way home after being released from Russia, where officials said he was wrongfully detained since 2019.

“Today, our prayers have been answered and Trevor is safely on his way back to the United States,” his family said in a statement.

Reed’s release came as part of a prisoner swap with Russia, with the US sending back Konstantin Yaroshenko, a Russian pilot sentenced in 2011 to a 20-year prison term for importing more than $100 million of cocaine.

The surprise prisoner exchange was the result of long and difficult negotiations between the US and Russia, according to both countries. The fraught diplomacy was made all the more extraordinary because of the utter collapse of relations between Washington and Moscow over Russia’s invasion of Ukraine.

President Joe Biden, who met with the Reed family last month, said in a statement on Wednesday that the negotiations to release him “required difficult decisions that I do not take lightly.”

“I heard in the voices of Trevor’s parents how much they’ve worried about his health and missed his presence,” Biden said. “And I was delighted to be able to share with them the good news about Trevor’s freedom.”

Reed, 30, was imprisoned for allegedly assaulting a police officer while he was drunk, but his family and US diplomats said he was innocent, describing the evidence against him at trial as “preposterous” and “absurd.” Instead, they said he was being held as a bargaining chip.

In recent weeks, Reed’s health had deteriorated and he had been hospitalized with signs of tuberculosis and a possible broken rib, according to the State Department, making his release all the more urgent.

Reed’s family said Biden’s decision to go ahead with the prisoner swap may have saved the former marine’s life. They had previously expressed fears that Reed might suffer the same fate as Otto Warmbier, the American student held for 17 months in North Korea who went into a coma after his 2017 release and died.

The State Department has previously declined to identify exactly how many Americans have been detained in Russia, but there are at least two high-profile prisoners who remain behind bars there: Paul Whelan and WNBA star Brittney Griner.

Whelan, another former Marine, has been detained the longest, having been first arrested at the end of 2018, and accused of being an American spy. His family has denied this, but he was sentenced in 2020 to 16 years in prison.

Ryan Fayhee, a former Justice Department official now acting as a pro bono attorney for the Wheeler family, said they had “complex feelings” about Wednesday’s news.

“They wish the family the very best, but they also view this as a missed opportunity,” said Fayhee, pointing to the different crimes the two swapped prisoners were convicted of. “It was a pretty high price to pay. If you make a comparison between the two people who’ve gone home today, to not include Paul in that is a missed opportunity.”

Fayhee called on Biden to meet with the Whelans like he did with the Reeds, and consider alternative options than prisoner exchanges in order to free him.

Related Topics:featured
Up Next

Worldcoin Promised Free Crypto If They Scanned Their Eyeballs With “The Orb.” Now They Feel Robbed.

By age 15, he was already playing professionally for Brazilian team Santos, and at 16, he joined the country’s national team. At 17, he became the youngest player to make it to the World Cup final, where he scored two goals — securing Brazil’s first title and his place as an international sports icon.

In the almost two decades of his career that followed, he averaged more than one goal per game and holds the Guinness World Record for most career goals. He’d go on to win two more World Cups and rack up other accolades, and fans relished not just the victories, but how he played. He popularized soccer’s nickname, “the Beautiful Game,” a phrase which became synonymous with his style. In 1961, he was legally named a national treasure in Brazil — a political move aimed at keeping the popular player from being transferred outside of the country. He later revealed that European football clubs did come calling, but he continued to play for Santos and Brazil.

Pope Benedict XVI Has Died at 95

Arguably the most incendiary issue Benedict faced upon becoming pope was the ongoing fallout from the sexual abuse of children by Catholic priests, as well as accusations of a cover-up effort on the part of church administration.

When Benedict became pope in 2005, the Catholic Church was in the midst of a very public reckoning with its history of sex abuse — a crisis about which he was very well informed. In 2001, John Paul II empowered the CDF to centralize all investigations into abuse allegations, removing that power from local dioceses after it became clear that they often failed to take action against predator priests. As the head of the CDF, then-cardinal Ratzinger worked to establish new procedures for reporting and punishing clergy accused of sexual abuse.

As pope, Benedict repeatedly spoke out against the church’s legacy of child sex abuse, apologized to victims, and defrocked hundreds of priests who had been found guilty. However, for many, his actions fell short, in part because he failed to make public the Vatican’s investigations into abuse accusations — a lack of transparency that enabled dioceses to keep these accusations secret from parishioners and law enforcement authorities.

“In the Church’s entire history, no one knew more but did less to protect kids than Benedict,” the Survivors Network of Those Abused by Priests (SNAP) said in a statement in 2013, in response to the pope emeritus’s public claim that he did not engage in a ‘cover-up’ of clerical abuse. “As head of CDF, thousands of cases of predator priests crossed his desk. Did he choose to warn families or call police about even one of those dangerous clerics? No. That, by definition, is a cover up.”

Rumors of corruption and secret cabals in the Holy See also plagued Benedict’s tenure as pope, culminating in the “Vatileaks” scandal in 2012.

On Feb. 10, 2013, Benedict shocked the world by announcing his resignation from the papacy. “After having repeatedly examined my conscience before God, I have come to the certainty that my strengths, due to an advanced age, are no longer suited to an adequate exercise of the Petrine ministry,” he said in his official statement.

His decision to retire was later dramatized in the 2019 film The Two Popes, in which Benedict was portrayed by Anthony Hopkins, who was nominated for an Oscar for his performance.

As pope emeritus, Benedict made a conscious effort to stay out of the public eye. He apparently disliked being known by such a lofty title following his resignation and asked others to call him simply “Father Benedict.” He did, however, make public appearances at events of theological significance, such as the Canonization Mass of Pope John XIII and Pope John Paul II on April 27, 2014.

Protests are continuing in China against strict COVID lockdown restrictions after a deadly apartment fire brought some people closer to a breaking point.

Across the country, demonstrators took to the streets — a mass movement that is rare in China — and defied laws designed to curb the spread of COVID-19. Some appeared with sheets of blank white paper, in place of traditional protest signs, as a criticism of the censorship limiting citizens from speaking freely.

After the fire in Xinjiang that left at least 10 people dead, which critics say was due to the stay-at-home measures that resulted in the building’s doors being locked, protests intensified Sunday. In major cities like Shanghai, protestors gathered to demand the end of the country’s ruling party and the resignation of the president. In clips circulating social media, some demonstrators can be heard repeatedly chanting, “Communist Party step down, Xi Jinping step down.”